Three guys go to a ski lodge, and there aren’t enough rooms, so they have to share a bed.

In the middle of the night, the guy on the right wakes up and says, “I had this wild, vivid dream of getting a hand job!” The guy on the left wakes up, and unbelievably, he’s had the same dream, too.

Then the guy in the middle wakes up and says, “That’s funny, I dreamed I was skiing!” 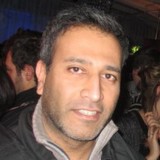